My Letter to the Editor published in Crain's Chicago Business

I just got my letter to the editor published in Crain's Chicago Business: 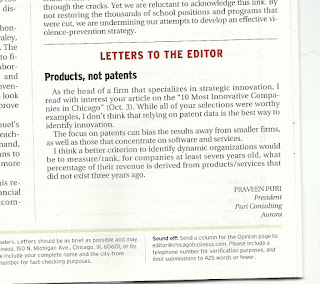 Posted by Praveen Puri at 11:43 AM No comments:


I'm now a columnist for the "Chicago Business Journal" and today was my first column: http://www.bizjournals.com/chicago/news/2016/10/17/how-the-craft-beer-craze-inspired-the-re-birth-of.html
Posted by Praveen Puri at 8:40 AM No comments:

In this past weekend's edition of the Wall Street Journal, they had an article in the "Money" section about how the decline of the British Pound (by Brexit and Thursday's "flash crash") would "cost" Anheuser-Busch InBev NV an extra $13 billion to acquire SAB-Miller PLC.

Now, to give them credit, the WSJ did put quotes around cost.

But, still, my first reaction was, "if InBev's purchase became more expensive, because they were using pounds to buy SAB-Miller in dollars, why didn't they hedge their currency risk?"

It turned out InBev did hedge – just like any responsible corporation should.  Moreover, they were doing the opposite: they were using dollars to buy SAB-Miller in pounds.

The WSJ article was trying to make the point, while acknowledging the hedge, that InBev could have made an extra $13 billion without the hedge because the pound weakened so much against the dollar.

Now, some might find this interesting, but InBev did not lose $13 billion. They did the responsible thing.  Their core competency is beer, not currency speculation.

The hedge allowed them to pay exactly what they would have paid, based on the GBP-USD price at the time the deal was announced.  It removed any uncertainty around currency change.

What if the market had gone the other way, and the pound had gotten stronger against the dollar by the same magnitude? Then, they would have actually paid $13 billion more for SAB-Miller, which would have been unacceptable.

Think of the currency hedge like insurance.  If you pay $5,000 for homeowner's insurance for the year, and your house doesn't burn down, you don't say that the result (house staying safe) cost you $5,000.
Posted by Praveen Puri at 1:04 PM No comments:

However, this year's conference turned into an adventure.

Because of Hurricane Matthew, our conference was cancelled at noon of the first day, after the hotel made the decision to close for the safety of guests and staff.

At that point, we were all in a mad scramble to change flights, and find some way home.  Airlines' websites were unresponsive, their hotlines putting us on hold for hours, and flights being cancelled left and right.

It was at this point, under adversity, where the Palm Beach Four Seasons' staff, especially the concierges, really shined.  They calmly worked with us for hours, helping us make arrangements.

When, later in the evening, Palm Beach ordered a mandatory evacuation, the Four Seasons booked all the remaining guests into the Hilton by the airport, and made the transfer seamless.

I, for one, can't wait for next October's conference, and a return.

I've mentioned in previous blog posts that crisis and problems, even though we do our best to avoid them and hope they never happen,  do occur, and they provide the real opportunity for the customer-oriented innovative companies to distinguish themselves from the pack.
Posted by Praveen Puri at 12:31 PM No comments:

West Elm and Innovation: From Furniture to Boutique Hotels

I read an interesting article in the Wall Street Journal that furniture retailer West Elm is planning, along with a hospitality management company called DDK, to create a chain of boutique hotels.

This is a cool example of innovation.

What does West Elm know about running hotels?  That is probably why they partnered with DDK. They will probably handle the operational details.  West Elm, however, brings expertise in furniture and design which, if you think about it, is valuable because a hotel room is like a home away from home.

Boutique hotels are in demand because frequent travelers are getting tired of cookie-cutter hotel rooms.

West Elm can use its products to create hotel rooms that stand out in comfort and style.

The other great thing, from West Elm's perspective,  is the synergy created.  Not only can they make money from renting out rooms but hotel guests will also be able to order their room's furnishings online.

Thus, the hotel will not only be an independent source of revenue, but also another way to promote their products.

So what prompted West Elm to be innovative and start hotels?

It turned out that West Elm's leadership was smart enough to realize that opening more stores would not be a path to growth.  Instead, it would cause cannibalization of sales.
Posted by Praveen Puri at 11:54 PM No comments:


Just before the Great Recession, when Sam Zell led the ultimately doomed leveraged buyout of the Chicago Tribune, he and his fellow investors planned to sell the Chicago Cubs to help pay down debt.

In 2009, they found a buyer for the Cubs – the Ricketts family. They bought the team for $845 million.  Since the Tribune had bought the Cubs in 1981 for $20.5 million, they were on the hook for a large tax bill.  They tried to avoid paying it by using a leveraged partnership instead of an outright sale.

Fast forward seven years to today.  The Cubs are now worth $2.2 billion and the favorite to win the World Series.

I wonder if the Tribune wishes it held on?

While the Cubs made the Tribune $824.5 million over 28 years of ownership, the Ricketts family made $1.355 billion over just 7 years of ownership.  To add insult to injury, the IRS is still pursuing them for $225 million in back taxes.  The IRS considers the leveraged partnership to be a disguised sale.

Why did the Cubs explode in value during the last 7 years?  The progress on the field had little to do with it.

The key is Tivo.

Tivo pioneered the concept of fast-forwarding live TV, time-shifting, and binge watching.  Commercial TV has lost much of its value to advertisers.  The one exception is sports – people will still view them live, without fast forwarding.

Out of all sports, baseball is the one that has the most broadcasts during a season.  TV networks and channels started bidding to win the right to telecast baseball, and the TV money exploded, along with team values.

The Chicago Cubs have always been one of the most watched teams, and are in one of the most TV-friendly markets in the country.  As a result, their economic value was especially affected.
Posted by Praveen Puri at 10:38 PM No comments:

Moleskine Knows What Business It's In: How Syntegra Capital Made a 19-Times Return Through Paper Luxury

You've probably heard of Moleskines – the fancy hardcover notebooks introduced in France in the 1980's. In recent years, they have become popular with artists, writers, and millennials.

Millennials? That isn't a typo.  When Syntegra Capital bought a majority stake in Moleskine in 2006, some thought it was a risky investment because of the threat from digital technology.

Instead, as mentioned in a recent Wall Street Journal article, it has become trendy to carry both a Moleskine and an iPhone.  The notebooks have been such a must-have that Syntegra, currently in the process of selling Moleskine, will end up enjoying a 19 fold return on their investment in just 10 years.

It probably isn't a co-incidence that, after buying Moleskine, Syntegra hired a new CEO from the luxury jewelry company Bulgari.

Syntegra succeeded because, just as an iPhone isn't just a phone, they considered a Moleskine to be a luxury item – not simply a commodity notebook.
Posted by Praveen Puri at 4:57 PM No comments:

Credit Card Fees: Businesses Should Reward Customers, Not Punish Them

There was a recent article in the Wall Street Journal about the Supreme Court agreeing to hear a case about whether local governments can ban merchants from charging fees or surcharges to customers who use credit cards.

This debate is also occurring internationally.  For example, according to the Journal article, the European Union is banning credit card surcharges next year because they say that retailers can't discriminate based on payment method.

However, I think that focusing on the legal issues is missing the larger picture.  From a customer service and innovation perspective, charging customers for using credit cards is a mistake.

Credit and debit payments are the future – whether they are done with "cards", chips, watches, or phones.  Charging an extra fee for the dominate and most convenient payment format will simply drive customers to the competition.

What are some alternatives for merchants?

1. Accept the fee as a cost of business.  Instead, focus your efforts on encouraging your customers to spend more money per transaction.

2. Raise your fees across the board, and offer a discount if customers pay with cash.

3. Offer some other perk (besides discounting) if customers pay with cash.

Never think of punishing a customer, especially when he is actually trying to buy something from you.  Buying should always be a rewarding and hassle-free experience.
Posted by Praveen Puri at 4:57 PM No comments: