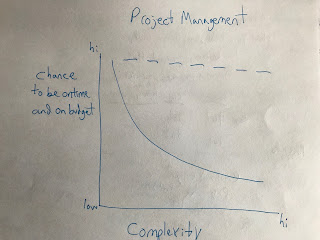 I recently read that Lincoln Center scrapped their $500 million renovation because, according to a New York Times article,  they "got the sense the project got too complicated".

The turning point came when the project teams said the orchestra would be in temporary quarters for a third year.

Now, the new plan will be to do the project in phases—it will be "less monumental and more incremental".

For years, I have advocated for projects to be broken up logically into phases (like how the Lord of the Rings movies were broken out into 3 movies).

The diagram above shows the difference.  The solid curve represents doing a large project in one shot.  Notice that, as the complexity increases, the chance for the project to be on time and budget plummets.

The dashed lines represent the project done in phases.  Notice how, as complexity increases, the project still has a good chance to be completed on time and budget.
Posted by Praveen Puri at 1:21 PM